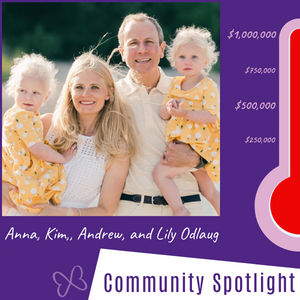 Community Spotlight, meet The Odlaug, Nusslock, and Brennan Families and join us in thanking and congratulating them on reaching their fundraising goal of $1 million for DSF!

Andrew and Kimberly Odlaug blessed their family in September 2017 with the birth of Anna Grace. Anna was diagnosed with Dravet syndrome in early May 2018 after suffering from a number of prolonged seizures. In wanting to do more to help Anna, Anna’s grandfather, Ted, turned to learning about Dravet syndrome at a genetic level, various therapeutic options and the pipeline for new drugs and gene therapy. It did not take him long to embrace the DSF mission, and with the help of others in their family they started a fundraising campaign to raise $1 million for DSF.

The Odlaug Nusslock, and Brennan Families not only exceeded their fundraising goal of $1 million, they have now raised their goal to raise $2 million for DSF.  The total raised to date reflects the efforts of their entire family; Anna’s parents – Kim and Andrew, Kim’s sister Chelsea, Andrew’s sister Erika and brother Tommy, Andrew’s parents Pat and Ted, Kim’s parents Marsha and Cary. Also Andrew’s Aunts and Uncles in St. Louis, Missouri led by Uncle Jimmy Brennan have contributed significantly. In addition, other family members, many friends and others have donated.

“Our entire family is committed to supporting Anna and the work of the foundation. The cause is very important to us, and we appreciate all the support we can get for our dear Anna and all the children like her. We strive to remain optimistic and focus on reasons for hope, of which there are many. Never give up and find a cure is our mantra. Together we can make a difference”

From the entire Dravet community, THANK YOU to The Odlaug, Nusslock, and Brennan Families for raising funds and spreading awareness of Dravet syndrome.